Dia grid beam floor in R.C.C.: in this system there will be diagonal beams across the slabs when seen in elevations but none in horizontal direction. This system gives more space in centre of building because there are no columns. Also due to lack of horizontal beams it gives neat space within.To find out more about dia grid, please put the following on your web browser: http://tinyurl.com/bp2nubk 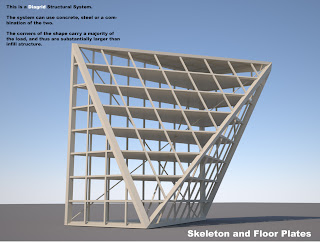 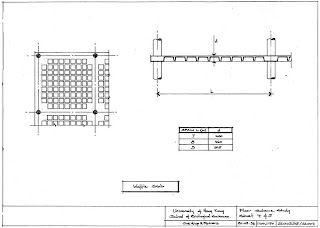 Flat slab:  An important development in RCC floor is that of a flat slab RCC floor. In this method slab is built monolithically, with supporting columns only without provision for beams. The flat slab may either be with drop or without drop. The term drop is used to indicate that part of slab around the column having greater thickness than the rest of the slab.  See the sketch above to give various nomenclature of flat slab.
The reinforcement in the flat slab can be arranged either in two – way system or four – way system. For ordinary loading conditions, the two-way system of reinforcement is generally adopted. The flat slab construction grants the following advantages.
i). as the slab is constructed without any beam, a flat ceiling is obtained which gives attractive appearance and greater height without obstructions for services.
ii). It is considered less vulnerable in case of fire as compared to the ordinary slab-beam construction.
iii). The concrete is more logically used in this type of construction and hence it proves to be economical for large spans with heavy live loads.
iv). The formwork is simple and economical.
v). The plain ceiling grants better diffusion of light.

Hollow block and rib floors: In this type of floors, the hollow blocks of clay or concrete are used to reduce the total weight of the floor.
In one form, the blocks are placed 100 mm apart and in this space, the mild steel bars are placed as shown in sketch. A minimum cover of 80 mm is kept at the top . suitable flooring at top and ceiling finish are provided. The blocks are provided with rough or grooved surface so that they can develop enough bond with concrete. This type of floor is economical, fire-proof, sound-proof and light in weight. If properly designed, this type of floor can even be used to carry heavy loads. The plumbing and electrical installations can be conveniently carried through the hollow blocks without affecting the appearance. As hollow blocks replace a portion of solid concrete, the dead weight is reduced and thereby the economy is achieved. These floors are widely used for buildings like hospitals, hotels, schools, offices, etc. the structural hollow clay floor tiles should be free from cracks and they should be of uniform color and texture. It is desirable to keep projections on one of the extreme face of such tiles so as to facilitate the application of plaster. The weight per meter length of structural hollow clay floor tiles does not exceed 140 N. The length, width and height of structural tiles are from 450 mm or 900 mm, 190 mm or 240mm and 70 mm or 90 mm respectively.

Pre-cast concrete floors: With the development of pre-cast concrete construction technique, it is possible to prepare the pre-cast units for the floor. These pre-cast units are available in suitable sizes as can be conveniently handled, transported and fixed. They may be supported either on walls or on rolled steel joists. The sides of each unit contain grooves which are used to connect the adjacent units.


Advantages of pre-cast concrete floors: Following are the advantages of the pre-cast concrete floors:
i). The construction work can be carried out speedily as there is absence of operations like watering, curing, etc.
ii). The members are light in weight and hence the foundation cost proves to be economical.
iii). They are fire – proof and  sound – proof.
iv). They do not require formwork during construction.
v). They have good thermal insulation.
Disadvantages of pre-cast concrete floors: Following are the disadvantages of the pre-cast concrete floors:
i). There are chances for breakages to occur during their transport from factory to the site of work.
ii). They prove to be economical and cheap only when manufactured on a large scale.
iii). They require careful supervision and skilled labor during their manufacturing process.
iv). They require fairly uniform spacing of beams and columns throughout the structure which becomes practically difficult.
v). They should be properly designed to resist the stresses developed during transport and handling operations.

please follow my post and put your queries in comments. it is very simple procedure. click 'follow' on left hand top side and fill in details as requested. i will try my best to give answers.